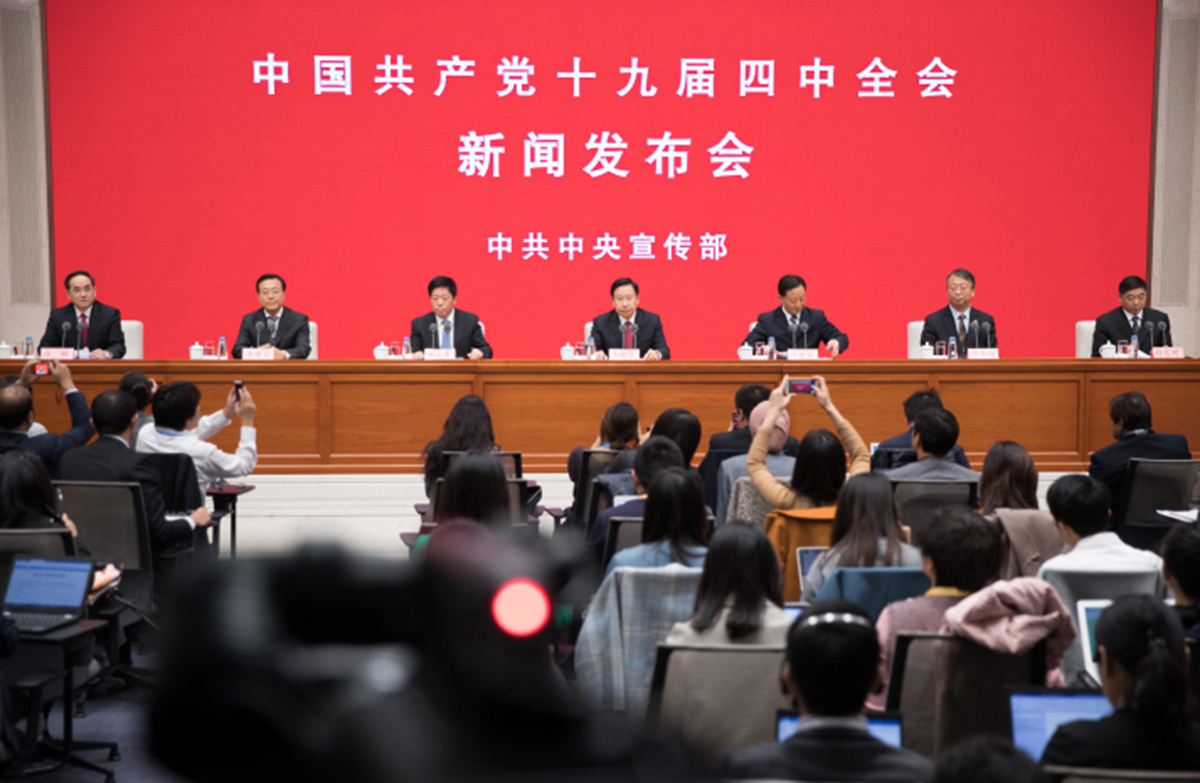 Interpreting a Milestone Meeting
Scan with wechat to share

Following the conclusion of the Fourth Plenary Session of the 19th Central Committee of the Communist Party of China (CPC) in Beijing on October 31, officials from related fields explained its different aspects at a press conference in Beijing on November 1. This is an edited excerpt of what they said:

Significance of the Meeting

Deputy Head of the Publicity Department of the CPC Central Committee

It is the first time in the history of the CPC that the national system and governance issues have been discussed and decisions taken on them at a central committee plenary session. It will have a far-reaching influence.

It was an important meeting held at a critical juncture. The world today is undergoing profound changes unseen in a century, making the external environment for China's development more complicated. Domestically, China is in a crucial period of achieving national rejuvenation, and has entered the final stage of securing a decisive victory in establishing a moderately prosperous society in all respects. This year also marks the 70th anniversary of the founding of the People's Republic of China.

The theme of the plenary session—upholding and improving socialism with Chinese characteristics and modernizing the national governance system and capacity—is vital to advancing the causes of the Party and the country, the long-term stability of China, and the wellbeing of the people.

The most important outcome is the document issued that comprehensively summarizes the historic achievements made in building a socialist system with Chinese characteristics, its advantages and the national governance system.

The leadership of the CPC is the defining feature of socialism with Chinese characteristics and its greatest strength. The plenary session decided that six things should be done to coordinate all efforts and improve the leadership system to ensure that the CPC will always provide the overall leadership:

First, establishing a system for ensuring all CPC members stay true to the Party's original aspiration and keep the mission firmly in mind. The whole Party must always adhere to its nature and fundamental purpose, its ideal and belief, and its ultimate goals.

Third, improving the system for upholding the CPC's leadership over all work. We must ensure the CPC's role in "exercising overall leadership and coordinating the efforts of all involved."

Fifth, improving the system for strengthening the CPC's governance capacity and its art of leadership. We must build up the Party's capacity to govern in a sound and democratic way and in accordance with the law.

Sixth, improving the system for ensuring full and strict governance over the Party. We must advance internal reform in the CPC and increase its capacity to resolve its own problems.

We will remain committed to consolidating and developing the public sector of the economy, and encouraging, supporting and guiding the development of the non-public sector. There is need to deepen reform of state-owned enterprises, develop mixed-ownership economic entities and form a new type of cordial and clean relationship between the government and enterprises to promote healthy growth of the non-public sector of the economy.

We will adhere to and improve the system of distribution. Distribution according to work will be the dominant mode with a variety of other modes coexisting. We should both expand the pie of economic growth and share it fairly.

The system of people's congresses

The people's congress system is a fundamental political institutional arrangement for upholding the leadership of the CPC, governance by the people and the rule of law. It is the political foundation of the national governance system and capacity.

The main advantages of the system, a great creation of the Chinese people in the history of political systems, are five-fold:

First, it fully ensures the people are the masters of the country.

Second, it fully mobilizes all Chinese, as the masters of the country, to devote themselves to the cause of socialist construction, pool wisdom and strength from all quarters, and advance toward the ambitious goal of national development.

Fifth, it provides powerful support for improving the national governance system and capacity.

The system of socialist rule of law with Chinese characteristics

Second, we need to improve both the legislative systems and mechanisms and the quality and efficiency of legislative work, so that good laws are made to ensure good governance.

Third, we need to improve the legal assurance for social fairness and justice. Strict law enforcement and impartial administration of justice are essential to ensure people can see justice served in every judicial case.

Fourth, we need to intensify law enforcement oversight. Efforts should be made to ensure impartial exercise of the administrative, supervisory, judicial and procuratorial power.

The system of multiparty cooperation and political consultation under the leadership of the CPC is part of the basic political system of China.

Under the leadership of the CPC, the Chinese People's Political Consultative Conference (CPPCC) has played a very important role in different periods, including the founding of the PRC and the socialist revolution, construction and reform.

The plenary session emphasized the need to give full play to the role of the CPPCC as a political organization and a form of democracy, improve its capacity of political consultation, democratic oversight and participation in the deliberation and administration of state affairs, and better build consensus. It put forward the following measures: improving the role of the CPPCC as a specialist consultative body, enriching the forms of consultation, and promoting sound rules for consultation.