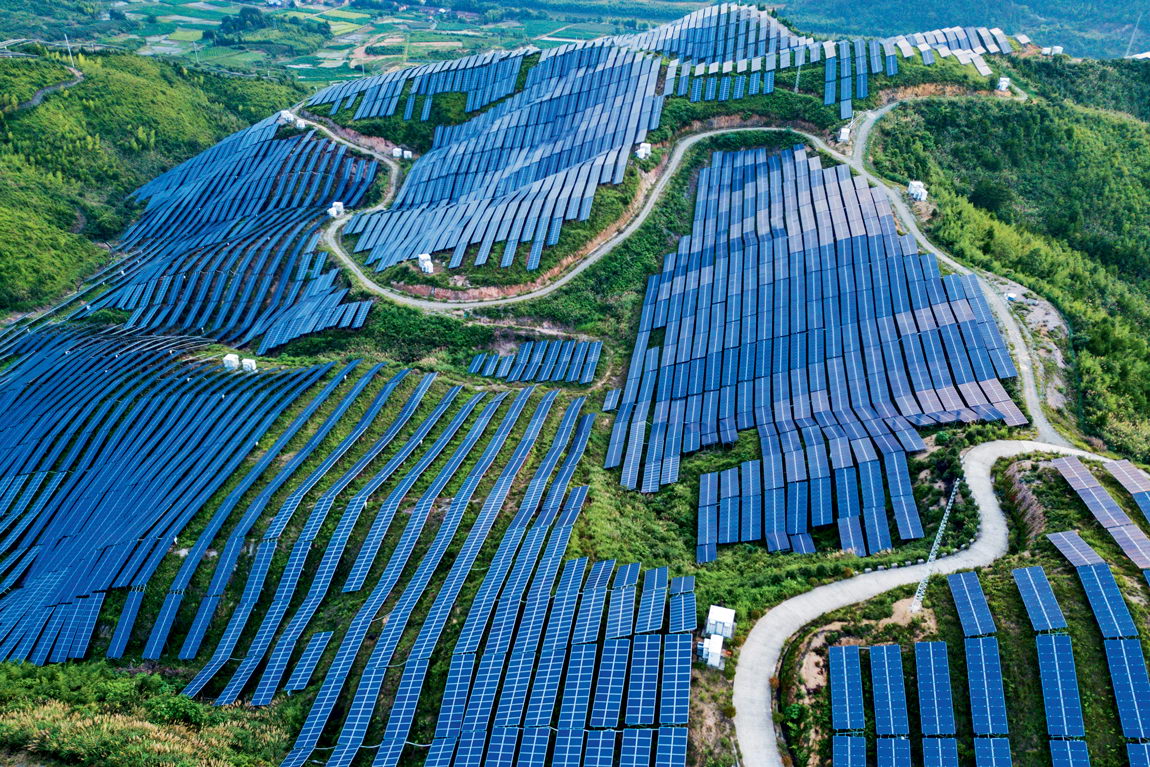 New Energy for Global Transformation
Scan with wechat to share

Tireless efforts over more than a decade have resulted in stunning achievements in China’s new energy development. The country has realized a structural transformation as it shifts from traditional fossil fuels such as coal to a package of clean solutions including nuclear power, hydropower, wind power, solar energy and biomass.

The top 10 enterprises with the biggest installed capacities of wind power in the country produce a total installed capacity of more than 100 million kilowatts. Their manufacturing capabilities for some parts such as blades, gear boxes and generators are on par with advanced international standards. These enterprises are capable of providing reliable supporting equipment for mainstream wind turbine models. And the wind power service industry is becoming increasingly important.

In 2017, the production capacity of China’s polycrystalline silicon development enterprises totaled 210,000 tons, accounting for half of the world’s total. With ever improving production technologies, the comprehensive cost of polycrystalline silicon development has dropped to less than 90,000 yuan per ton and industrial efficiency has increased to nearly 19 percent. Total production capacity of silicon chips has witnessed a sharp rise to nearly 82 gigawatts, an increase of 35 percent on a year-on-year basis and accounting for nearly 87 percent of the world’s total. Prices for parts and components have dropped to around 2.5 yuan per watt this year. And the annual yield of components from China is more than 70 percent of the world’s total.

To promote the development and utilization of renewable energy resources, increase energy supply, improve energy structure, safeguard energy security, protect the environment and realize sustainable economic and social development, the Renewable Energy Law of the People’s Republic of China was implemented in 2006 and revised in 2009. The law stipulated basic rules and entity responsibility such as guaranteed full purchase related to renewable energy development.

Two governmental documents, The 13th Five-year Plan (2016-2020) for Renewable Energy Development and Reform Strategies on Energy Production and Consumption (2016-2030), specified the 2020 and 2030 goals for renewable energy development. By 2020, the proportion of non-fossil energy and natural gas in primary energy consumption should reach 15 percent and 10 percent, respectively. By 2030, the figure should hit 20 percent and 15 percent, respectively.

In terms of supervision and monitoring, the National Energy Administration issued its 2015 and 2016 supervision and assessment reports on the country’s renewable energy power development. The reports evaluated absorption and consumption of non-hydroelectricity and renewable energy electricity of different provincial-level administrative units. Besides, it also covered the policy implementation situation such as guaranteed purchase of wind power and photovoltaic power.

In March 2016, China’ National Development and Reform Commission and National Energy Administration promulgated a document specifying measures for guaranteed full purchase of renewable energy. Based on the document, areas that have given up developing wind and photovoltaic power must meet minimum annual purchase amounts for wind and photovoltaic power. Additionally, a supervision and early warning mechanism for wind power has been established. In accordance with Notification on the Results of 2017 Wind Power Investment Supervision and Precaution, China designated red alert areas for wind power development and construction. No new wind power projects are allowed to be established in such areas. The country vowed to take measures to address problems related to abandonment of wind power.

Major renewable energy projects such as grid-connection of wind power and photovoltaic power with state-set prices, base construction of leading photovoltaic technologies and solar thermal energy demonstration projects have been promoting technical innovation and industrial upgrade. These projects have also played a vital role in driving industrial scale and structure to higher levels.

In 2017, China’s National Energy Administration issued a draft notification on the requirements for the construction of advanced photovoltaic power generation technology application bases. The draft designated the construction scale of each base at 500 megawatts. In three years, the construction of all these bases will be complete, related advanced technologies will reach industrialization and the technical indicators for 2017 industrial leaders should rise.

In September 2017, in accordance with pilot work requirements on grid-connection of wind power with state-set prices issued by China’s National Energy Administration, the administration announced pilot projects in areas including Hebei, Heilongjiang, Ningxia and Xinjiang with a total scale of 707,000 kilowatts. Prices of wind power in these projects are required to set the same as prices of local on-grid coal power. And efforts must be made to absorb and consume wind power in local power grids.

Against the backdrop of global climate change, international energy restructuring and China’s reform of energy production and consumption, new energy development is looking at tremendous opportunities.

Second, China has entered a new era of socialism with Chinese characteristics that requires the country to strictly pursue green development in the energy sector. The report delivered at the 19th National Congress of the Communist Party of China in 2017 made energy requirements crystal clear. The report expounded on the importance of energy development to “speed up reform of the system for developing an ecological civilization and building a beautiful China,” which testified to the importance China attaches to energy restructuring and green development in the new era. The country’s future energy development will follow the general principle of building a clean, low-carbon, safe, and efficient energy system while maintaining a commitment to raise awareness of the need to respect, protect and accommodate nature and stick to the road to green development.