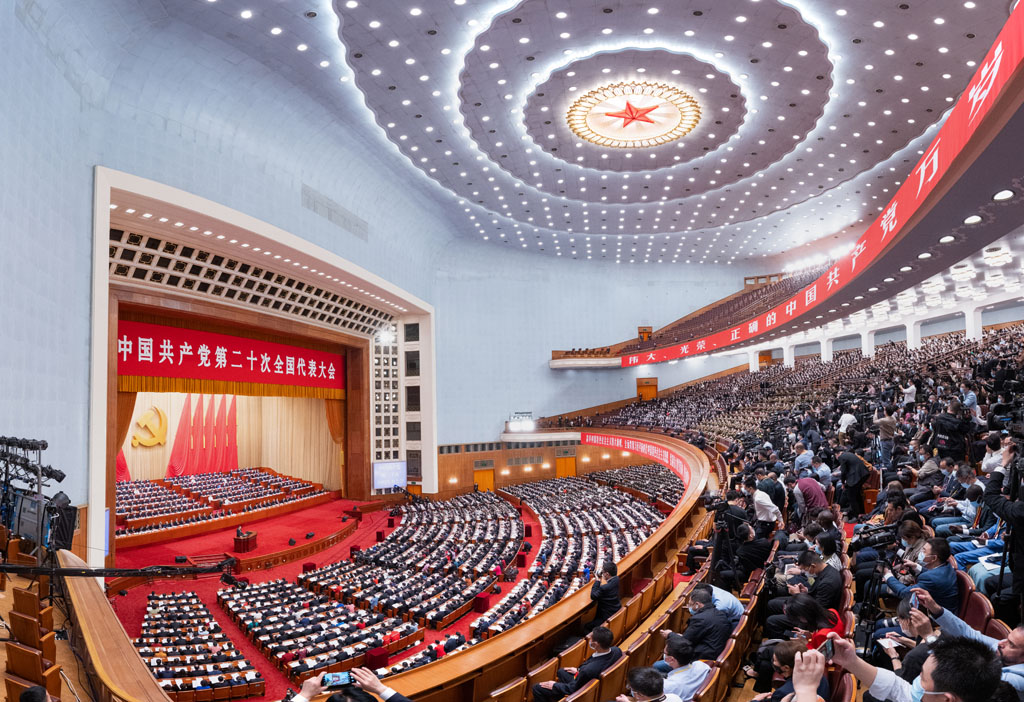 The 20th National Congress of the Communist Party of China (CPC) opens at the Great Hall of the People in Beijing, capital of China, Oct. 16, 2022. by Wan Quan/China Pictorial

Prospects for China’s Global Role
Scan with wechat to share

Many key factors have contributed to the Chinese miracle. The reform and opening-up policy, among others, remains important to China’s resilience in development. Keeping with the legacy, Chinese President Xi Jinping has provided grand narratives and ideas which are crucial in the 21st century for joint development of China and the rest of the world. The rejuvenation of the Chinese nation is a journey that requires persistence and visionary policies. In both China’s domestic and foreign policies, the major attributes of a grand vision have been orchestrated by President Xi.

Every five years, the Communist Party of China (CPC) holds a key congress. This October, its 20th National Congress is taking place. Over the past century, Chinese people, generation after generation, have dedicated themselves to realizing national rejuvenation. With effective strategies and robust plans, the country is steering the path of national rejuvenation in the new era.

Undoubtedly, President Xi has played a core role. China has eradicated extreme poverty with efficacious plans and policies. With a people-centered approach and sustainable initiatives, the country has enhanced its socioeconomic development and global outreach over the past 10 years. The success story has marked the new era for China on its path to modernization. I believe that China will basically achieve socialist modernization by 2035, and develop into a great modern socialist nation that is prosperous, strong, democratic, culturally advanced, harmonious and beautiful by the middle of the 21st century.

Voyage of the CPC

The world has seldom witnessed such landscape-changing movements in a short time frame. The CPC, founded in 1921, can aptly be considered a true model of excellence. Over the century, the CPC has grown from a small party with just over 50 members into the largest Marxist governing party in the world, with more than 96 million members in a country of more than 1.4 billion people. The past century has seen dramatic changes in China with enormous unleashed productive forces, unprecedented social transformation and huge advances in human civilization. It all was made possible due to the contribution of the CPC.

All the struggles and efforts made by the Chinese people under the strong leadership of the CPC have been directed to one goal—the rejuvenation of the Chinese nation. Moreover, to ensure the people’s status as masters of the country, and improve the performance of the Party and the state institutions, China has expanded socialist democracy through an integration of advanced electoral democracy and consultative democracy.

China has proposed to enhance international cooperation and communication across diverse fields. In the new era, major developments have been driven by the Belt and Road Initiative (BRI), the idea of building a community with a shared future for mankind, the Global Development Initiative (GDI), etc. These grand visions have brought fundamental changes in the discourse of international relations. China’s reforms and governance have generated continuous economic growth, offering abundant opportunities to other countries for common development.

The GDI is a classic example of China advancing mutually beneficial cooperation. The initiative caters to the most urgent needs of the world, such as poverty alleviation, food security, fight against the COVID-19 pandemic, and solutions to climate change. President Xi incorporated the goals of the GDI with the United Nations Sustainable Development Goals (SDGs). It is a clear manifestation that China is working to assist the global community in achieving the SDGs till 2030 through the initiative. It is anticipated that the GDI will help mitigate inequality and realize the dream of development while adhering to the principles of ecological civilization. China’s commitment to SDGs is encouraging for the aspirants of globalization.

In all of its endeavors in revolution, construction and reform, the CPC has always proceeded in reality rather than placing its faith in books. The 20th CPC National Congress will roll out a roadmap for China’s development along with major plans to address global challenges and expand international cooperation. The BRI has provided an important platform for building a global community of shared future. It is imperative to follow the Silk Road spirit characterized by “peace and cooperation, openness and inclusiveness, mutual learning, and mutual benefit.”

In a nutshell, China will innovate at a faster pace and achieve high-quality growth. New strategies and robust plans will continue to emerge for wider integration at both regional and global levels. This will lead to the creation of a much stronger structure and balanced development with a ripple effect, which will offer other countries more opportunities with a shared forward-looking spirit.

The author is executive director of the Pakistan Research Center for a Community with Shared Future (PRCCSF) in Islamabad.