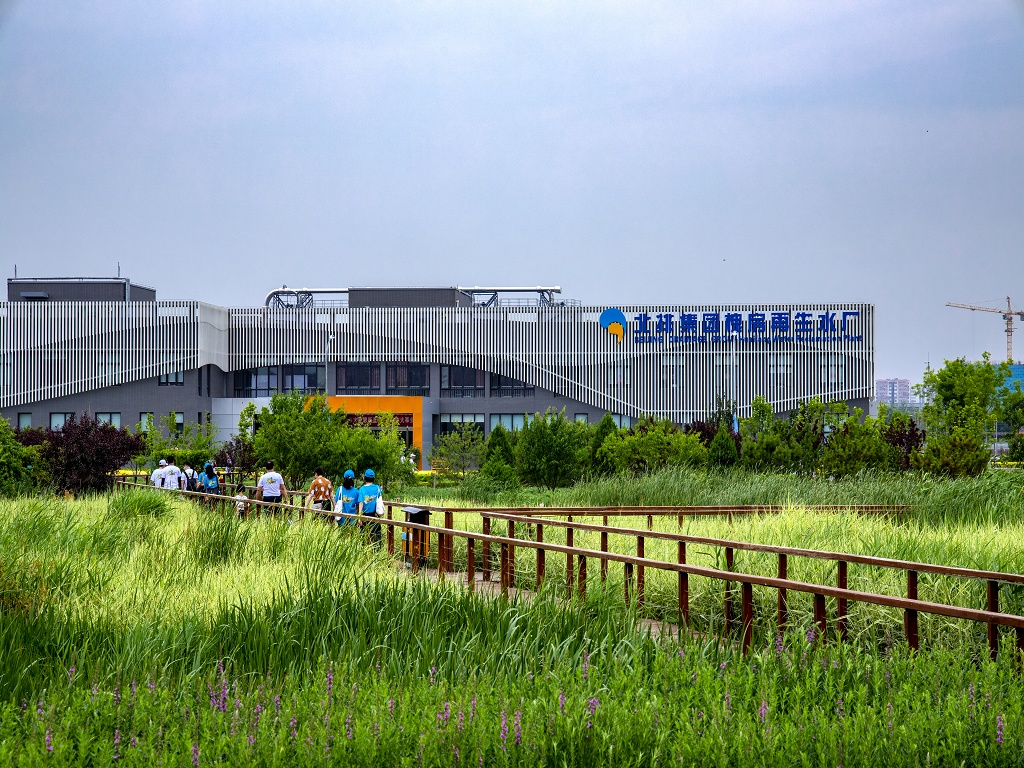 The Huaifang Water Reclamation Plant, located in the south part of Beijing, is the largest underground reclaimed-water project in Asia. Within a fully-enclosed operation system, it treats 600,000 cubic meters of reclaimed water per day, equivalent to the daily drainage of two million households. The pressure of sewage treatment in southern Beijing has been completely relieved and the water quality of the Liangshui, Macao, and Fengcao rivers has effectively improved thanks to the plant. VCG

Reclaiming Water for Thirsty Beijing
Scan with wechat to share

In recent years, waterside tours have become quite trendy in Beijing. Many choose to spend their leisure time relaxing on the banks of rivers and lakes. This trend can largely be attributed to ecological water replenishment, where reclaimed water is an active participant. Reclaimed water refers to treated wastewater or rainwater that can be used after meeting certain quality standards. It can be used to replenish rivers and lakes, facilitate industrial production, water flower beds, flush toilets, and much more.

In 2001, Beijing issued the Overall Outline of Sewage Treatment and Reclaimed-Water Reuse in Urban Areas, laying important groundwork for utilization of reclaimed water. Between 2001 and 2011, several reclaimed-water plants were successively built in downtown areas including Qinghe, Beixiaohe, and Fangzhuang. From 2013 to 2019, three consecutive three-year action plans for sewage treatment were issued, significantly improving needed capacity.

Today, there are 26 upgraded plants for sewage and 68 newly-built plants treating reclaimed water in Beijing. The daily workloads of the city’s above-scale sewage treatment plants increased to nearly 6.88 million cubic meters in 2020, coupled with a treatment rate reaching 95 percent. Generally, urban areas and townships have achieved full collection and treatment of sewage alongside harmless disposal of sludge. As a stable and reliable “secondary water source,” Beijing’s 1.2 billion cubic meters of reclaimed water account for about a third of the city’s overall water resources annually, ranking first nationwide.

As the first “dual Olympic city,” Beijing optimized usage of reclaimed water in greening landscapes and toilet flushing for Olympic venues during Beijing 2008. It became a pioneer of integrating reclaimed water into landscaping and vegetation irrigation in the central section of the Olympic Green, compared to previous host cities. The dragon-shaped water system of the Olympic Green gained quite popularity as a “water-axis landscape,” enabling people to relish interactions with water amid ecological tranquility hidden behind the hustle and bustle of the city. However, many don’t realize that algal blooms—overgrown microscopic algae or algae-like bacteria—once plagued the reuse of reclaimed water.

As the single water source of the dragon-shaped water system, reclaimed water features organisms and nutrients like nitrogen and phosphorus with thick sediment. Also, the water system is so shallow that sunlight can penetrate through. As a result, excessive reproduction of algae caused a severe lack of oxygen in the water body, causing the water to become black and odorous. In 2011, the Beijing-based company I & Earth Ecology used the “Water Ecological Technology” to restore the 165,000-square-meter water system. The results were quite rewarding after its four-month adjustment and optimization of water microorganisms, underwater vegetation, and aquatic animals.

In another case, the city’s Haidian District also made efficient use of reclaimed water to better its regional water environment. Despite having ample water resources, many rivers and canals in the district were dry, including the Dazhai Canal of the Nansha River, where today’s Huameishan Wetland Park is located. In 2020, the district’s water authority launched a campaign to supply channels mainly with reclaimed water and create a circulating replenishment system, which not only revitalized dry watercourses, but improved water quality.

Years of efforts have resulted in a huge volume of high-quality reclaimed water replenishing Beijing’s water systems and restoring the vitality of rivers and lakes with clear water and green shores. The city’s efficient usage of reclaimed water is improving day by day. Alongside irrigation, car washing, and toilet flushing, reclaimed water has been gradually introduced to industry production, environmental improvement in rivers and lakes, and road watering. Wasting tap water on landscape irrigation will disappear step by step. In the future, Beijing will make greater efforts to improve the efficiency of using reclaimed water to alleviate the supply-demand dilemma and realize a virtuous circle of water ecology.