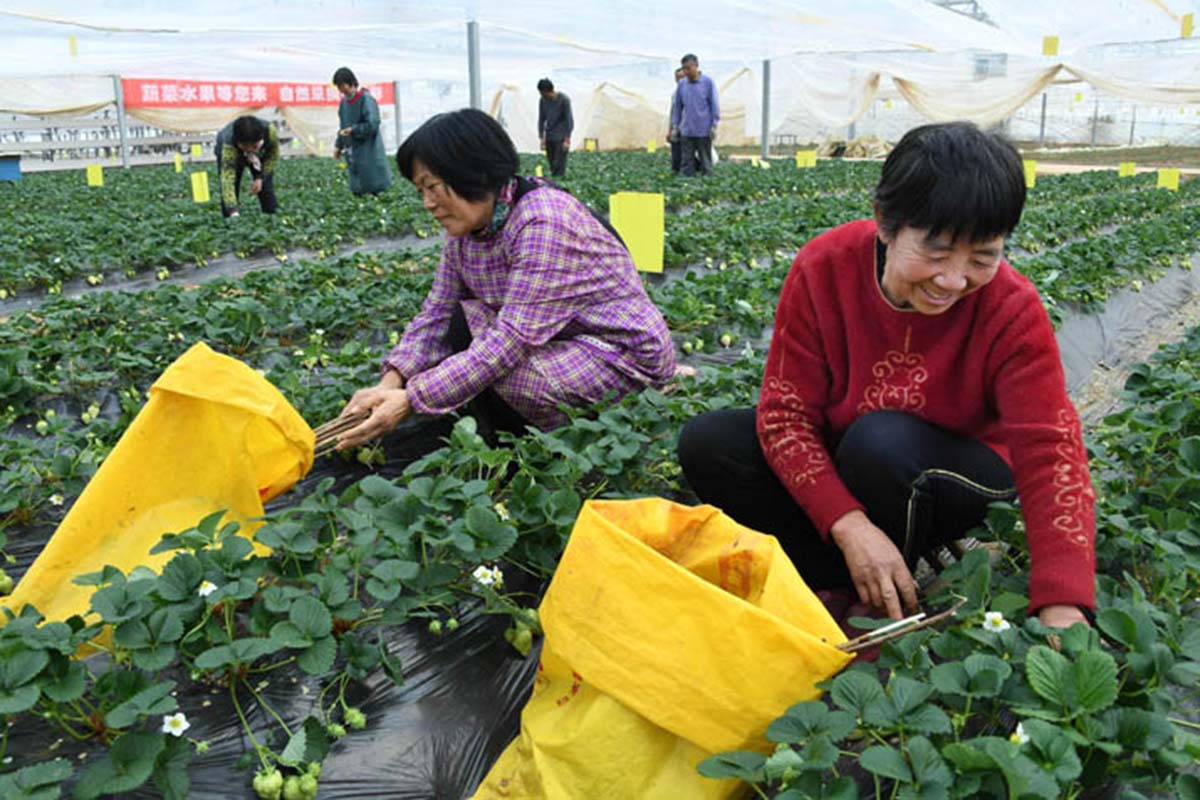 Villagers work in a greenhouse for organic farm produce in Laixi, Shandong Province, on March 5, 2019 (XINHUA)

Tremendous changes have taken place in China's economic and social development after more than 40 years of reform and opening up. Chinese economic aggregate now ranks second in the world. However, the country's economic and social development is not yet balanced, with the manufacturing and service industries growing much faster than the agricultural sector, and urban areas developing much quicker than rural areas, leading to a huge rural-urban gap.

President Xi Jinping, also General Secretary of the Central Committee of the Communist Party of China (CPC), joined deliberation with deputies from central China's Henan Province on March 8, during the Second Session of the 13th National People's Congress. China is an agricultural country and Henan is a major agricultural province. Affirming the achievements in Henan, Xi also stated that the implementation of the rural revitalization strategy and progress in work related to agriculture, rural areas and farmers should be taken into consideration and promoted in overall economic and social development.

The top task of implementing the strategy is to ensure food security. For a major country with a population of almost 1.4 billion, food security is the foundation of social stability as well as economic and social development. In 2018, China's grain output was 600 million tons, enough to satisfy the country's grain needs. However, we should never relax the emphasis on food security and must always ensure we have control over our own food supply. Modern and efficient agriculture is oriented toward ensuring grain production with intensive farming and science and technology to steadily improve grain production capacity.

To implement the rural revitalization strategy, high-quality development must be pursued, which requires green development and a good ecological environment.

Rural reform is another focus of the rural revitalization strategy. It involves work in two areas, the first of which is institutional reform. The rural-urban dual system has become an obstacle to China's economic and social development. College graduates, rural laborers and financial and industrial capital prefer urban areas. Therefore, Xi called for deepening reform to promote two-way flow and equal exchange of factors--including human resources, land and capital--between urban and rural areas, so as to stimulate the endogenous dynamic of rural revitalization.

The second area of rural reform is the supply-side structural reform in agriculture. At present, the principal challenge in China's agricultural development is structural problems instead of undersupply. Major problems lie on the supply side. For instance, the supplies of ordinary corn and rice are in surplus, while those of environmentally friendly farm produce, due to increasing demand, are still inadequate. Therefore we should appropriately readjust the grain planting structure and shore up weak links in agricultural infrastructure, ecological environment, and the building of quality brands at a faster pace.

Improving people's wellbeing should be the purpose of the rural revitalization strategy. This year's No.1 Central Document vowed to double the 2010 per-capita disposable income of rural people and ensure they live a moderately prosperous life. Public service quality in rural areas will be improved in education, healthcare, social security, elderly care, culture and sports in order to ensure a uniform standard of basic public services in urban and rural areas.

Emphasis must be placed on rural governance to implement the rural revitalization strategy. Efforts should be made to strengthen the leadership of primary-level Party organizations, appoint capable Party secretaries in rural areas, rectify weak and lax village Party organizations, further explore rural residents' self-governance and strengthen effective oversight of power at the village level. We should also work to enhance social etiquette and civility, foster good family tradition and honest social milieu, and improve the diversified dispute resolution mechanisms.