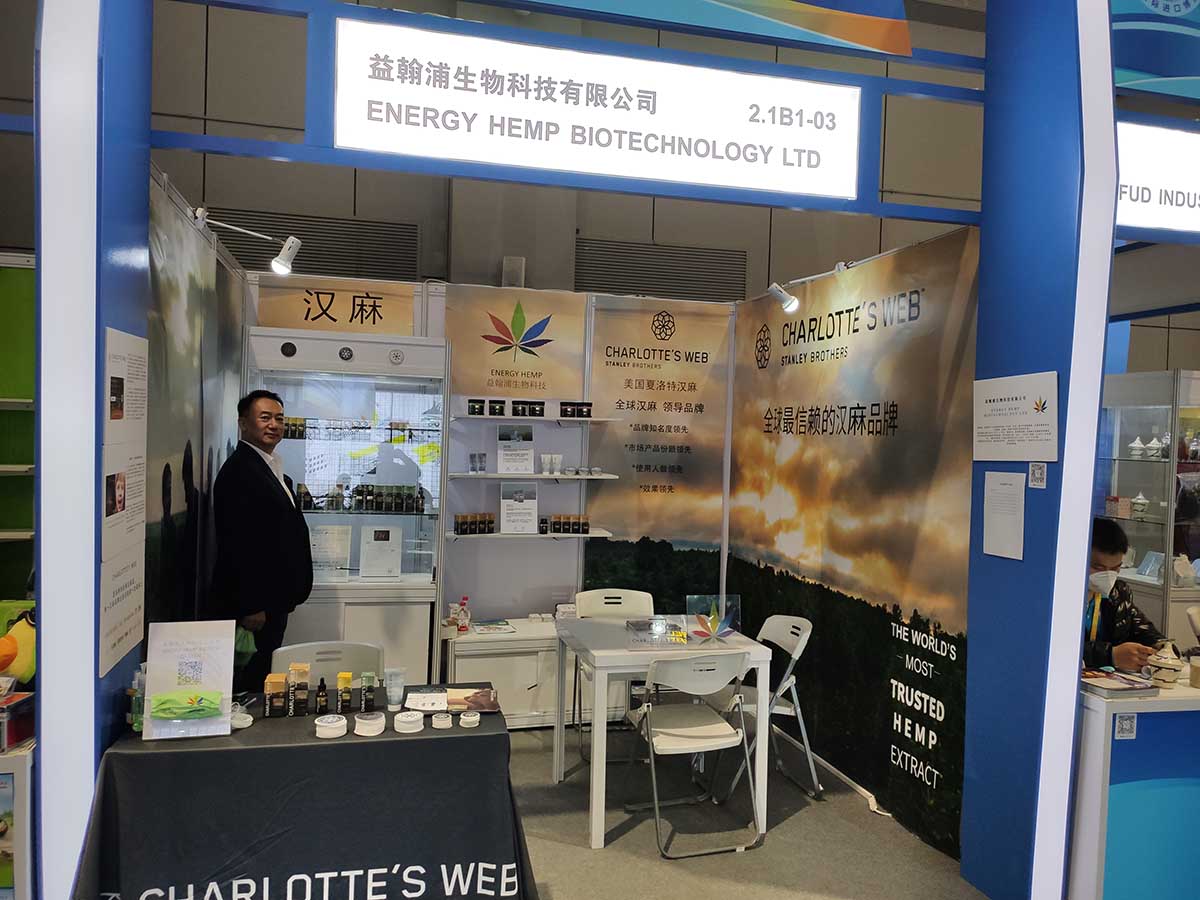 The Energy Hemp booth at the CIIE.

Sometimes two countries produce the same cash crop, but one country figures out how to use it and market it in a particularly innovative way. How can they share their strengths with each other? At this year’s China International Import Expo (CIIE), running from November 5 to10 in Shanghai, China, one of the exhibitors is showing how the CIIE serves as a step in international sharing of products and ideas. Eric Sze, president ofEnergy Hemp Biotechnology, Ltd., a company representing the American company Charlotte’s Web which produces products including hemp extracts, shared the company’s products and their plans for deeper cooperation in China to serve market demand and develop their business.

With his father from Shanghai, Sze was born in China’s Taiwan, and he has lived for many years in the Los Angeles area of southern California. He has spent the majority of the past 20 years in Shanghai. Sze is one of the human catalysts helping bring Chinese and American business together. This was his company’s second year at the expo. Charlotte’s Web employs over 1,000 workers in America and took US$94.6 million in revenue during 2019. Energy Hemp introduced their products to China at the 2019 CIIE, and the contacts they made with the provinces of Yunnan and Heilongjiang, hemp-producing regions in China, opened the way for further business development planning.

According to Sze, there are 60 million people in America using products with hemp extracts to deal with mild headaches, prevent anxiety, help epilepsy, and for the old, deal with Parkinson’s and Alzheimer’s. In China, with younger generations needing to manage high-pressure lives, hemp products could help them with sleep and reduce stress. With China’s aging population, it could help alleviate symptoms of Parkinson’s and Alzheimer’s. The company’s first product that was approved for sale in the Chinese market was a skin care product for women.

Some of the relationships they make at the CIIE are with investors. Last year they received a lot of interest from investors in the Chinese stock market, and this year as well as last year they were the only hemp product company on the Chinese stock market and at the CIIE. For now, they only produce in America, but they are looking at opening a plant in China’s Yunnan Province which would employ 100-200 workersin the beginning. They are looking to export to other countries in Asia from a base in China.

Sellers, buyers, and even investors come together at the CIIE. The representatives may be local Chinese, or they may be people who have lived their lives in many places, becoming human bridges for business connections around the world. The solution to a company’s need for a new product or demand to help them continue to move products may just be sitting in a booth on the edge of one of the exhibition halls at the CIIE. Such interesting people as Eric Sze will acquaint you with what benefits their products offer, whether it is right for you or your company, and how to start getting regular shipments. Government officials and investors also come around, seeking opportunities to develop the places for which they are responsible or seeking to use their wealth to improve businesses. There is something for everyone at the CIIE.