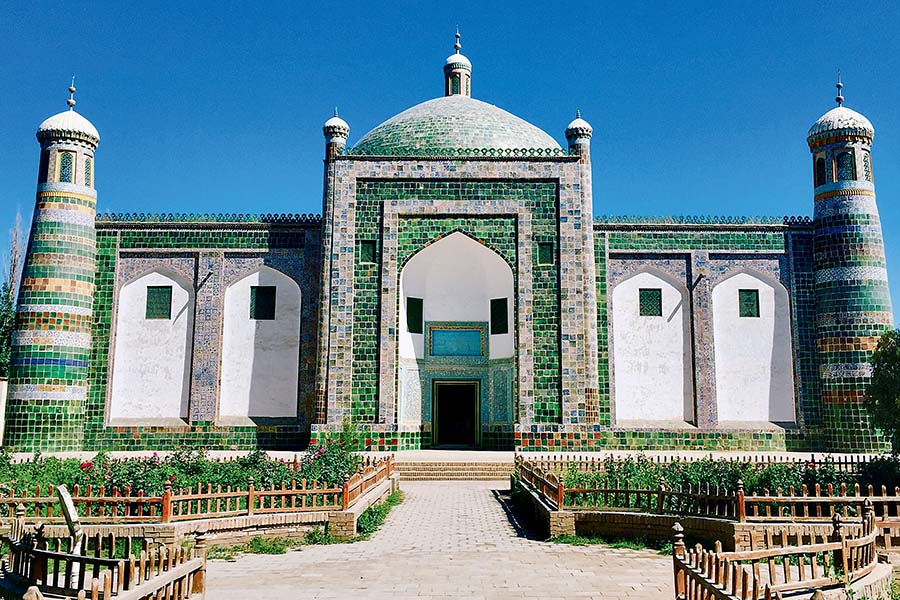 Abakh Khoja Tomb is best known as the resting place of one of Kashgar’s most popular rulers.

After living in many Middle Eastern countries such as Egypt, the United Arab Emirates, Syria and Yemen, I couldn’t wait to visit Xinjiang, China’s biggest Muslim region with a predominant Uygur population.

Tucked in the westernmost corner of China, the oasis city of Kashgar in the Xinjiang Uygur Autonomous Region marks the intersection of two branches of the ancient Silk Road and has been the junction of regional trade and cultural exchange for more than two millennia. And so it remains today. Like Urumqi, the capital of the Xinjiang Uygur Autonomous Region, Kashgar dramatically contrasts the rest of China. I was most fascinated by the local population of this metropolis. Home to over 500,000 according to the 2010 census, the city is fueled by colorful ethnic diversity—a mosaic of the Uygurs, Han, Kyrgyz, Tajiks and Uzbeks.

Kashgar’s Old City has been deemed one of the “best-preserved” examples of a traditional Islamic city anywhere, and it attracts more than one million tourists annually, according to estimates.

Most people don’t realize that the award-winning movie The Kite Runner, set in Kabul, Afghanistan, was actually filmed in Kashgar due to safety and security concerns.

Kashgar’s narrow, labyrinthine alleys all seem to lead to the yellow-tiled Id Kah Mosque, built in 1442, which remains the spiritual and physical heart of the city. Muslim and non-Muslim men and women are allowed inside, but visitors are required to dress modestly and remove shoes before entering the carpeted area, and women are asked to wear a headscarf.

Local street snacks such as mutton kebabs and bagel-like breads can be found in food stalls opposite the Id Kah Mosque. The neighborhood is also a great place to buy souvenirs and local crafts such as copper teapots, musical instruments and wooden jewelry boxes.

As they have done for centuries, Uygur craftsmen and artisans continue working with hammers and chisels, traders haggle in boisterous bazaars, and carts pulled by donkeys still creep down narrow alleys.A flat, round bread called “nang” fresh from the oven.

A highlight of any trip to Kashgar is an excursion to the lively Sunday livestock market, which only happens on that day and remains a fascinating sight. Thousands of Uygur farmers and herders from peripheral areas come to sell cattle, sheep, camels, horses and donkeys.

Another must-see attraction is Kashgar’s Grand Bazaar. Its history can be traced back as far as 120 B.C. when famous Chinese explorer and envoy of Emperor Wudi of the Han Dynasty (202 B.C.-220 A.D.), Zhang Qian, visited Kashgar. Throughout the history of the Silk Road, the Grand Bazaar was a place where merchants from India, Persia and even Rome exchanged goods with merchants from ancient kingdoms in western China. With over 2,000 years of history, it remains a fascinating blend of cultures and still offers a mesmerizing selection of goods such as handicrafts, carpets and spices. Haggling is a must.

Located three kilometers from the city center, the Abakh Khoja Tomb (also called Xiangfei Tomb in China) was my favorite attraction. It is a 17th-Century mausoleum of the powerful Islamic Kashgar ruling family and contains five generations of tombs. It is considered one of the holiest Muslim sites in Xinjiang and has become a pilgrimage destination. Prayer day is Friday.

Kashgar’s Sunday market is famous near and far. Porters load goods on their backs or push trolleys through the crowds while yelling “Boish boish”, which means “make way” in the Uygur language. Despite its name, the market is open every day—but Sunday still draws the biggest crowds.

A 4-hour drive from Kashgar is Karakul Lake (“Black Lake”), another highlight thanks to its glittering mirror of glacial peaks. From its shores, one can enjoy a panoramic view of the Pamir, Tianshan and Kunlun mountain ranges. Unfortunately, thick clouds were covering this roof of the world during my visit.

Departing from Kashgar, one can continue along the southern Silk Road through either Torugart or Irkeshtam Pass to Kyrgyzstan, or south to Pakistan along the world’s highest paved international road: the breathtaking Karakoram Highway, one of my favorite thoroughfares in the world.

Kashgar features a desert climate with hot summers and cold winters. It is one of the driest cities on the planet, averaging only 2.5 inches of precipitation per year. The best time to visit is between August and September, but don’t forget to check the calendar for the Muslim holy month of Ramadan, when many shops and restaurants are closed during the day.

Modernity has swept this cultural and trade hub like a sandstorm. Where caravans and camels once trekked, taxis and motorcycles now crowd the streets. Dirt roads have become highways, and railroads now connect the region to the rest of China. Despite monumental changes, Kashgar’s spirit remains strong.

The author is a business reporter for CCTV NEWS, the English-language news channel of the Beijing-based China Central Television (CCTV).