The Middle-Aged Man and the Sea 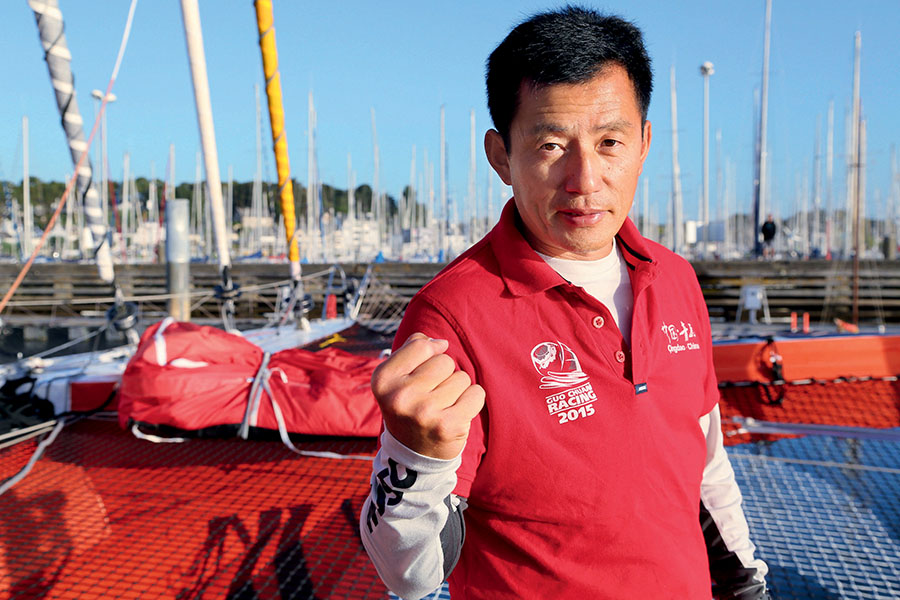 August 15, 2015: Guo Chuan sets out from La Trinité, France with five foreign crew members to sail through the Arctic Ocean Northeast Passage. After two years of dedicated preparation, the team became the first in history to complete a non-stop voyage through the passage. IC

Sailor Guo Chuan was scheduled to complete a voyage from San Francisco to Shanghai this November and celebrate a new solo world record with his team, family and other supporters. However, the whole month passed without his arrival, inspiring deep concerns for the seasoned captain.

Guo went missing in the vast Pacific Ocean seven days after he set off on his last attempt. The 51-year-old sailor lost contact with his team near Hawaii on October 25 as he sailed a trimaran named after his hometown Qingdao, across the ocean. The boat was found two days later near Hawaii but without Guo. People from around the world are still searching for him.

Many are reluctant to accept the grim outlook for the legendary sailor. In a sport where Chinese faces are rarely seen, Guo amassed a trophy case envied by adventurers worldwide. He completed a 138-day non-stop solo circumnavigation of the globe in 2013, becoming the first Chinese in history to complete such a mission and the first man ever to do it in such a small vessel: a 40-foot (12-meter) yacht. After joining the ranks of less than 200 solo non-stop circumnavigators of Earth, Guo led five crew members from Germany, France and Russia to thread the Arctic Ocean through icebergs and heavy smog. The non-stop sail through the Arctic Ocean’s Northeast Passage was unprecedented. Guo earned respect not only for completion of such bold trips but also the calmness with which he conquered extreme conditions.

In 2008, Guo became the first Chinese to compete in the world’s top VOLVE Ocean Race with the “Green Dragon.” In that race, Guo nearly broke the bridge of his nose after being thrown into the air when his boat collided with a large fish at a speed of over 20 nautical miles per hour. But for the 10-month voyage, the episode was merely a hiccup.

As media crew, Guo was tasked with documenting the efforts of the team. Working with 10 veteran sailors, Guo felt like “a student with 10 professors.” It didn’t help that his English was spotty and he worried that he was dead weight. Many days, Guo failed to film any good material by the time the sun set, and the mounting pressure only caused depression and fear. Then the situation worsened: Months of claustrophobia caused insomnia, leaving him with stiff muscles. “It felt like drowning,” Guo later recalled. “I lost control of my brain.”

When “Green Dragon” docked in his hometown of Qingdao in February 2009, local residents and media gave him and other crew members a hero’s welcome but few managed to see the emptiness in his eyes—Guo was on the brink of mental breakdown. “He lost twinkle in his eyes,” Guo’s elder sister described. Although those closest to him worried about Guo’s health and urged him to retire, he made the seemingly ill-advised decision to continue his oceanic “cultivation.” When asked his reasoning, Guo declared that he preferred to die like a soldier over being buried with regret for the rest of his life. He continued the mission. He recovered gradually with medications prescribed by doctors. He became better at filming the crew and writing their stories. He once described his endurance in the voyage as “a wounded soldier crawling forward,” and ultimately the soldier survived the 37,000-nautical mile journey on the waves.

Stream to the Ocean

Born in the eastern Chinese port city of Qingdao in 1965, Guo Chuan had childhood fantasies about the ocean but never imagined he would actually become a sailor. When he was young, Guo often spent time at the beaches with his friends. He once challenged himself to swim through a shark net from one beach to another, and set out on the mission after grabbing a flotation device and a bit of chocolate. Midway through the journey, he ran out his strength and ended up rescued by a fishing boat. Though he failed his most daring childhood stunt, his bold mentality only grew stronger.

Climbing up the ladder was relatively smooth for him when Guo grew up. Thanks to excellent performance in school, he was admitted to Beijing University of Aeronautics and Astronautics and earned a Master’s degree in aircraft control before an MBA from Peking University. He worked on commercial satellite launches at China Great Wall Industry Corporation, a state-owned company. Guo seemed destined to become a titan of business—except if he had any say in the matter.

Thirst for thrill and adventure led Guo to extreme sports. Since 1997, he tried skiing, paragliding, water skiing, microlight aircraft flying and diving, one after another. Traveling from continent to continent, he embraced great joy in the sky and life on the water. “I always look for new goals when my life is running low on challenges and pressure,” he remarked in a TV interview.

It’s hard for some to understand why Guo would let go of such a desirable job that ensured wealth and respect. A Chinese saying goes that a man should be committed to a career by the age of 30. Guo, however, opted for another life because, as he put it, he didn’t want to be a “dead fish.”

“I want to prove that a man can do something bigger after reaching maturity,” Guo said. And then came what he dubbed “his destiny.” Upon taking a trip on a sailboat as a passenger in Hong Kong in 2001, Guo fell deeply and passionately in love with sailing. Throughout his 30s, he competed in several sailing events in Qingdao and Hong Kong.

When he hit 40, Guo made up his mind to go even further and become a professional competitive sailor. He headed alone to Europe, the origin of sailing, and sought the places masters gather. He began living like an “ascetic monk” in his words. After settling on the west coast of France, Guo spent all of his days training and slept less than six hours a night. His diet was primarily rice, mushrooms and sausages. Repeated exhausting exercise lifted his spirit rather than boring him. He marched toward his dream steadily.

“Curiosity and adventure are human nature,” he stressed. Guo answered the call of his heart with unrelenting efforts to explore the ocean. The world was impressed by his sailing records. To him, sailing is unparalleled. “Other sports were invented by the world, but sailing is about exploring the world,” he explained. “Human wisdom was born of exploring nature and seeking better ways to get along with it.”

Sports reporters from Xinhua News Agency were among the earliest to report him. They have noted that throughout Guo’s many-year rise from nobody to a legend, his spirit had remained simple and pure, and he never lost passion or ambition. “I didn’t turn my back on my dreams,” Guo once wrote. Indeed, he stayed loyal to himself.

The ocean proved a worthy challenge. Hurricanes in the North Pacific lashed 5-meter waves at him, the windless equator trapped him in burning sunlight, and the Drake Passage froze him with Antarctic gales. But in Guo’s eyes, the ocean can be gentle as it can be fierce. He was stunned by starry nights on the water and magnificent sunrises and sunsets atop the horizon. Dolphins’ escorts and circling albatrosses felt like greetings from nature.

After enduring toughest times along with breathtaking moments, Guo freed his mind on the ocean by moving forward with determination and persistence.

The ocean is the place Guo chased his dreams, but his destination is always home.

With his 2013 circumnavigation of the globe, Guo conquered one of the biggest challenges of his sailing life: Navigating the planet’s most difficult passages near the landmark Cape Horn at the southern tip of South America. Often called the “Qomolangma” of sailing, the treacherous stretch of water has capsized over 500 ships and buried more than 20,000 sailors. Atop his 12-meter powerless boat, Guo couldn’t help bursting into tears. He clutched a toy bear and a photo of his youngest son in his trembling hands, and said to the camera on board: “I made it.” He named the boy “Guo Lunbu,” which sounds similar to “Columbus,” to honor the legendary sailor.

Upon crossing the finish line of the voyage in Qingdao, Guo jumped into the water and excitedly swam to his family. The media captured the touching scene of Guo kneeling down on the dock to give a big hug to his wife and kids, tears running down on his weather-beaten face. “The water is freezing, but my heart is warm,” Guo said in an interview.

His family is the source of his inner strength. They constantly appeared in his dreams, even 30-minute naps. With the help of the advanced satellite communication tools on his yachts, Guo managed to talk to his family during his voyages. On January 5, 2013, Guo’s family joined him on the South Pacific via video to celebrate his 48th birthday. He ate a bowl of instant noodles they had prepared beforehand. It was a luxury compared to the compressed dehydrated food he mostly ate. “It may not have been a great meal, but for me it was,” he said.

Family is the greatest comfort for the man who spent his days fighting howling wind and fierce waves on the ocean. “Everyday stuff calms him down,” remarked his wife Xiao Li. Guo and Xiao have two kids: The elder son is in primary school and the younger in kindergarten. His wife told him about everyday life and stories involving their kids while he was sailing on his boat, and he pasted the photos of his family on the cabin walls.

Guo’s family brought him the most joy. Parent-teacher conferences are annoying to many, but Guo considered them precious chances to engage with his kids’ growth. Xiao revealed in a TV interview that Guo felt envious that kids tended to cling to her more—but she said it with a big smile.

“My husband ensures that everyone in the family loves each other, and that is exactly what a husband should do regardless of his profession,” remarked Xiao, when asked for comment on the heroic sailor. Guo is awed and admired by many for taking the waterway less traveled. However, he has also been criticized as a maniac who takes too many risks while neglecting his family. Xiao has only spent five minutes on her husband’s sailboats and never sailed with him, but she has steadfastly supported his dream chasing.

“It really makes him happy and when he shares the sailing stories with us, it makes us happy too,” Xiao said in a recent TV interview. “I never know for sure why he sets out, but I know his final destination is home. It always is.”