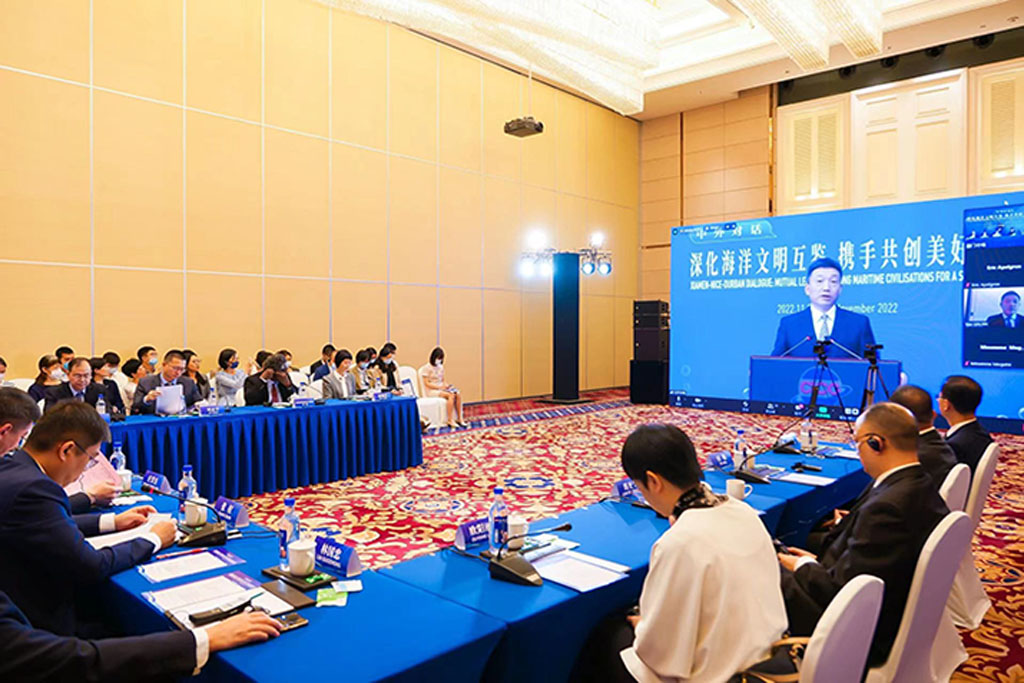 Officials and experts from international port cities of Xiamen in China, Nice in France and Durban in South African shared ideas for boosting cooperation on preservation of ocean resources and promoting sustainable development at a forum held online and offline in Beijing and Xiamen on 22 November.

The Xiamen-Nice-Durban Dialogue: Mutual Learning Among Maritime Civilisations for a Shared Future was jointly hosted by China International Communications Group (CICG) and the Xiamen Municipal People’s Government, and attended on site and virtually by officials from government agencies and international organisations, as well as experts on maritime and related studies from China, France and South Africa.

In his speech, Jean-Pierre Raffarin, former prime minister of France, stressed the importance of tripartite exchanges and cooperation among China, Africa and Europe in protecting the oceans, hence the need for experts from the three cities to come together to reflect on the future of humanity and the oceans that affect the world. He believed that by working together, the three sides can contribute to social development based on their respective experiences, technology and cultural characteristics. Raffarin emphasised that the protection of the oceans is essential to the protection of life on the Earth, and that only on a well-protected planet can mankind flourish. Raffarin called for cooperation to defuse confrontation at a time of global tensions, adding that the holding of the dialogue is an important step in promoting tripartite cooperation among Africa, China and Europe.

Yu Tao, vice president of CICG, said that marine protection, cooperation and governance have always been China’s key points of concern, and highlights of the 20th National Congress of the Communist Party of China, which pledged to “develop the marine economy, protect the marine ecological environment, and step up efforts to build China into a strong maritime country.” He noted that China has established comprehensive strategic partnerships with France and South Africa, which is the important political basis for the three cities to establish blue partnerships and strengthen marine cooperation and governance. He believed that through exchanges and dialogues, the three cities will further build consensus and broaden their cooperation in maritime development and civilisational integration.

Looking forward, Yu suggested to further tap the potential of China, France and South Africa in developing the blue economy, actively exploring new forms of exchange among maritime civilisations, and deepening friendship and cooperation among cities. He called for efforts to bring people closer through maritime exchanges, contribute wisdom to maintain maritime order and protecting marine ecology, and accelerate the achievement of the UN Goals of Sustainable Development related to the ocean. Yu expressed the readiness of CICG to give full play to its strengths in broadening academic publications and holding international exchange activities, and honour its commitment to telling China stories in this field. He pledged that CICG will share resources and strengthen cooperation with friends from other countries, including France and South Africa, to contribute wisdom and strength to jointly promote marine governance and harmonious coexistence between humanity and the oceans.

Zhuang Rongliang, vice mayor of Xiamen, said that Xiamen, Nice and Durban are all international port cities and tourist destinations featuring a blend of diverse cultures, and these common features have laid a good foundation for dialogue and cooperation among the three cities. He pointed out that as a coastal city that is prosperous because of the sea, Xiamen is now developing ocean-based hi-tech and new industries, strengthening marine ecological protection and accelerating the construction of an international city with marine characteristics.

Richard Chemla, vice mayor of Nice, said the importance of the ocean to humanity is self-evident in that it absorbs about a quarter of the carbon dioxide released into the atmosphere, allowing humans to effectively tackle the climate change crisis and prevent the rapid growth of greenhouse gases. According to him, ocean is a source of life, with its biodiversity offering mankind the possibility of overcoming persistent diseases and inspiring constant industrial innovations. He called for the recognition of the importance of the ocean and joint efforts of humanity to protect the ocean, which is shared by all humans.

Thomas Mxolisi Kaunda, mayor of Durban, said that Durban has officially agreed to enter into a sister city cooperation and friendship agreement with the city of Xiamen. He noted the dialogue offers a platform for the three cities to build partnerships, and share knowledge and expertise to make them resilient to withstand all the climatic, economic and social challenges that currently confront them all. He pointed out that the port of Durban is one of Africa’s leading ports and a key trading port for China and France. Ideas from the dialogue are needed to improve the efficiency of the port so that it can support the economic growth of Durban. He believes that working together will help the three cities build a better future.

During the discussion session, ideas were exchanged around three topics: Maritime Silk Road Promoting Exchange and Mutual Learning of Maritime Civilisations, Protection and Sustainable Development of the Oceans, and Youth Voices and Youth Strengths in Maritime Cooperation. The experts agreed that ocean protection and governance is a challenging global issue that needs to be addressed with joint efforts. They called on all parties to give full play to global research and technological resources, further strengthen coordination, deepen blue partnerships, and stimulate young people’s innovation ability, so as to promote the protection and sustainable development of the oceans and build a future-oriented maritime community with a shared future.

In his closing speech, Hu Baomin, director of the CICG Centre for Europe and Africa, said that since Chinese President Xi Jinping put forward the important vision of “building a maritime community with a shared future,” China has been deepening maritime connectivity and practical cooperation in various fields, contributing Chinese wisdom to global marine governance. He hoped that with this dialogue as a new starting point, all parties would continue to strengthen cooperation, bring people closer through cultural exchanges, improve the creation of ideas through information sharing, promote development through cooperation, deepen mutual learning among maritime civilisations and start a new chapter in the development of the marine economy.

Participants of the forum discussion include:

Dai Minhan, academician of the Chinese Academy of Sciences, director of the Faculty of Earth Science and Technology, and chair professor of Xiamen University